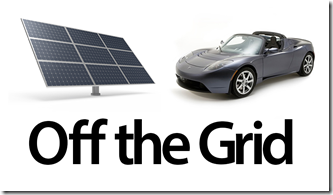 Electric car maker Tesla Motors is teaming up with the solar panel leasing company SolarCity to make what might be the first complete, packaged electrical system for an off-the-grid solar home.

Right now, homes equipped with solar panels are almost always tied into the local electricity grid. When the power goes out, the panels go too. Allowing panels to back-feed onto the grid risks the safety of a linesman making repairs. Using the panels during an outage—or just saving their daytime juice for use at night—requires storing the electricity the solar panels collect. These days, the rare homeowners willing to invest in battery backup usually accomplish it with a gang of lead acid car batteries.

But Tesla has worked for years to optimize lithium-ion battery packs for use in electric vehicles. SolarCity has developed a program to install and lease photovoltaic panels to customers at cost-effective rates in 12 populous states. A partnership, if successful, could create the equivalent of a giant residential solar backpack: Tesla crams lithium-ion batteries into one huge pack that could be charged up by SolarCity's photovoltaic panels. It's that simple.

The pairing was first reported in 2010 by the New York Times, but the cost efficacy of each company wasn't proven at the time. At the time, the proposed collaborative project targeted only six houses in New York City. But now—with potentially several dozen projects proposed in California—the proposition seems like it could really happen. Here's for getting the system online, and off the grid, somewhere soon. [GigaOm]