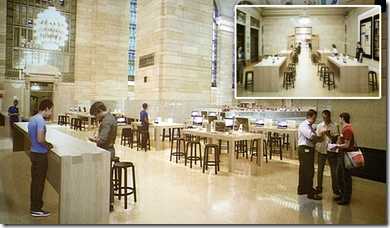 NYC's Metropolitan Transit Authority has released a couple renderings of what the new Grand Central Apple Store will look like. Of course, it will look stunning. But anything in the Grand Central atrium looks stunning.

The aesthetic of Apple's usual minimalistic setup merges perfectly with the breathtaking beauty of the station. It's almost invisible. According to the MTA, it will be completed in four months, beginning now.

Extra bonus: Grand Central would be getting a Shake Shack too, the NYC chain that makes the best burgers in the world. Now hipsters would be able to get all those iPad 2's dirty with delicious burger juice.